The Naming of Minerals, Rocks and Crystals

This subject is quite entertaining and often ends up in heated debates between people.

Many of the names of our stones originate from antiquity. The ancients had names for rocks and these varied from country to country as does the original meaning of the name. Alot of the original  information has been lost through time even though the name has stuck. Many of the ancient names have also been changed.

In modern times the name of a mineral is usually the first name that the mineral has been given in print. This has led to some confusin and no doubt arguments as many minerals were discovered and even named before they were written about.

Some clarification has been given by International Mineralogical Association's commision on new minerals and mineral names.

Today minerals can be grouped under the following headings:

The "New Age" movement has unfortunately added much to the confusion of Mineral Rock and Crystal naming. Many of the names used are not the accepted name for the mineral but a new name used by healers or retailers. In itself there is nothing wrong with giving a name to a rock, this is an example of the colloquial use of language. The problem arises when someone like HETTIE'S wants to provide a named rock or mineral, but as the name does not officially (scientifically) exist, several rock varieties may be represented under that "nick name".

The name Merlinite is NOT a mineral name. It is a colloquial name that has been given to an existing named mineral.

There are two definitions for this rock:

I am more inclined to go with Psilomelane as the true "Merlinite" because even though the Opalite contains Manganese Ore, it is not Psilomelane. You decide! 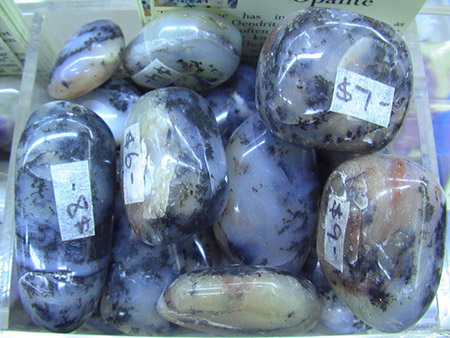 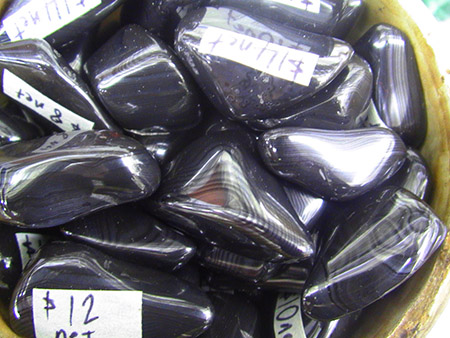 Above left: Merlinite Option One - Opalite

Now this stone is causing alot of emotions to flare between the Metaphysical dealers and the mineral dealers. It is Milk Quartz that has been named Azeztulite. It is sold by Metaphysical dealers for about NZ $10+ per carat, thats an unbelievable, in fact outrageous price! for milk quartz!

The Azez are a race of Alien beings that channelled information about crystals they imprinted with special spiritual energy for those searching for universal love and light! The unfortunate side of the legend is that the Aliens said they would only be available from one company, that then trade marked the name Azeztulite. This company is American, so if your Moroccan or Vietnamese or any other nationality looking for Universal Love and Light Crystal Energy and do not speak english, hard luck, the Aliens have only made these crystals available in America!

We get asked for it at Hettie's so we have it available but we make it very clear, you are buying Milk Quartz called Azeztulite. We sell it for $3.50 for a tumbled stone - a fair price for a tumbled piece of Milk Quartz.

In New Zealand the name Pounamu causes a bit of confusion because it is not the name of a mineral. Pounamu is a Cultural term used to describe the various Greenstones in the Amphibiole group of minerals found in New Zealand.

Members of this group that can be called Pounamu:

All these rocks could also be covered by the colloquial name - Greenstone, however it is generally believed that this name more specifically refers to Nephrite and Bowenite. Serpentine is also known as Noble Jade or Poor mans Jade.